Secure your spot and get started today with our EXCLUSIVE offer!

By opting into the web form above you are providing consent for Pendergrass Academy of Martial Arts to send you periodic text messages. Standard rates may apply. You can reply HELP at anytime or learn more. You may opt-out anytime by replying STOP.
ACCESS OUR SCHEDULE & EXCLUSIVE WEB SPECIAL
& EXCLUSIVE WEB SPECIAL

Secure your spot and get started today with our EXCLUSIVE offer!

By opting into the web form above you are providing consent for Pendergrass Academy of Martial Arts to send you periodic text messages. Standard rates may apply. You can reply HELP at anytime or learn more. You may opt-out anytime by replying STOP.

Great place to be! Highest quality of Jiu Jitsu you will find in the area.***Highly Addictive*** Once you start you can't stop.

My 7yo son has always been active in sports(tball, flag football, soccer) but he absolutely LOVES It here at PAMA. He looks forward to class every week.

Our twin girls have been coming to PAMA for a little over 2 years and still look forward to coming to class. Family friendly, locally-owned and operated. Instructor/owners are personable, knowledgeable and committed to providing quality instruction. Assistant instructors are dedicated and provide excellent support. I would highly recommend PAMA to parents who wish to pursue martial arts training for their children.

Pendergrass Academy is by far one of the best things that has happened to my children and I am now a student of PAMA you need to come give it a try it's a decision I promise you won't regret. The Academy is not just a place to study but a family. The staff is the best in the Business.

Just started training here. Great instructors always willing to help out. Everyone is extremely helpful and always looking to help out the newbies. Highly recommended

This is a great school. My oldest son has gained so much confidence in the 5 years he been coming here. My youngest has been enrolled for a few months and is having as much fun as his older brother. I became tired of watching them have all the fun so I joined too. Great kids program, great adult program and awesome instructors.

My husband and I both train here. My husband has trained here for years. I started with Muay Thai this past year and have just started jiu jitsu. All the teachers and staff here are great and the students are very welcoming. I could not say enough nice things about Pendergrass! Highly recommend!!!

Rob hosted a Beginning Jiu Jitsu class for me and 11 of my friends. He gave a great overview of jiu jitsu and we all had a blast on the mat. He was very nice, humble, and well paced though out the training. He even stayed later since we started a little late because of late arrivals. The facility is nice and it is great that they offer Muay Thai also. I think I am going to sign up and also sign up my kids. Thank you Rob for an awesome birthday. It was exactly what I wanted.

This is a wonderful program. All three of our sons have been a part of Pendergrass Academy for many years. It has taught them so much more than martial arts. We are grateful to be a part of this fantastic family business. 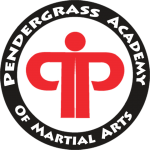 Let’s say someone walks up from behind you, they reach around and grab your neck. Most likely what they are trying to do is pull you backward and drag you. If you’re able to respond, you’re going to throw them overhead.

First, make sure your fingers are deep in the forearm and the bicep.

Now you’ll want to go for the armbar so you’ll put your knee on his ribs and then step over opponent’s head.

Now your opponent wants to counter this move. He’s going to grab your leg and do a backward roll over his right shoulder.

As he comes up he’s going to put his knee on your ribs. Switch the arm, make sure to control the wrist. Step over the head and fall back for the armbar.

So you are basically doing the same armbar that your opponent initially was trying to do to you just with the backward roll.